I should have known better but I did it anyway. It was a hot summer afternoon and the thought of a hotdog with plenty of relish and mustard was too good to pass up.  Add some chips, a fresh tomato and a large glass of iced tea, and it seemed like a perfect lunch. 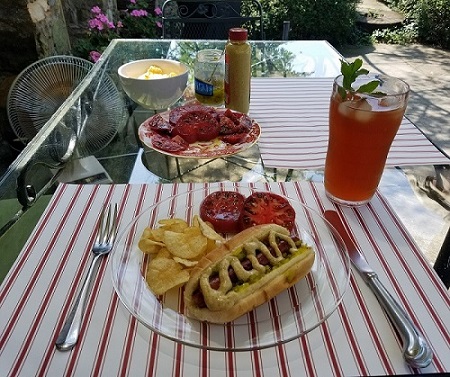 Or at least it would have been perfect except for the bisphenol F (BPF).  In two recent scientific publications, German and Swiss government scientists reported that BPF is naturally present at significant levels in most mustards.

Since BPF is naturally present, and people have been eating mustard for centuries, you might be inclined to conclude without another thought that it must be safe.  But the chemical similarity between BPF and bisphenol A (BPA) is striking.  To the casual observer they might even appear to be the same.

In fact, BPA and BPF are not just chemically similar. It’s been known for many years that both are weakly estrogenic.  Based largely on that biological property, BPA has been intensively studied by scientists around the world and has been controversial due to claims that it causes health effects at low exposure levels.

Although much less research has been done on BPF, it would be reasonable to assume that if BPA causes health effects, it is likely that BPF would also cause health effects. And that reasonable assumption is exactly why I’m not at all concerned about my repeated exposure to BPF over many years.

To explain why, let’s consider what we now know about the potential for BPA to cause health effects. Earlier this year, the results of the CLARITY study were released by the U.S. National Toxicology Program. The study, which was conducted by senior scientists with the U.S. Food and Drug Administration (FDA) in FDA’s own laboratory, was designed to resolve remaining uncertainties about the safety of BPA.

With a study of unprecedented scope and magnitude for BPA, that’s exactly what was accomplished.  In a statement released in conjunction with the CLARITY study report, Dr. Stephen Ostroff, Deputy Commissioner for Foods and Veterinary Medicine at the U.S. Food and Drug Administration (FDA) noted:  “our initial review supports our determination that currently authorized uses of BPA continue to be safe for consumers.”

So if you have a hankering for a hot dog with lots of mustard, go ahead and indulge without any concerns about BPF.  For sure I will again, most likely as soon as this weekend.